Pearls range from tiny 1mm seed pearls to 20mm South Sea giants (mortgage your house if you want a strand of these). For round pearls, the most common size is 7-7.5mm.

Pearl prices rise sharply after 7mm to 8mm, reflecting the difficulty of culturing large, good-quality pearls. The longer the mollusc remains in the water, the more chance of it dying of disease or some other cause, or of the pearl inside losing it's shape or developing unsightly blemishes. 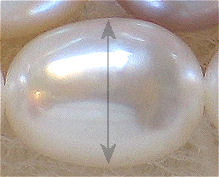 Pearls are measured in millimetres through their round diameter - perpendicular to the axis of the drill hole. For example, this 9mm oval pearl is measured along the line of the arrow.

Pearls are described in sizes like 5mm-5.5mm or 8mm-9mm. The pearls on the strand should fall on or between these measurements. Although a half millimetre sounds tiny, the human eye is good at spotting small differences 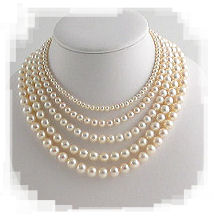 Probably the most famous pearl is the 'Hope Pearl' named after it's owner Henry Hope and displayed in the Natural History Museum in London. The pearl was found early in the 19th Century and weighs about 90 grams. 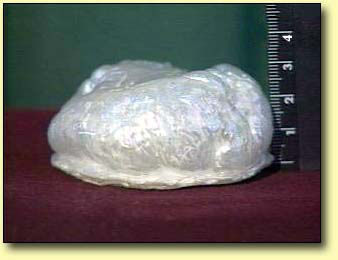 More recently, this silver coloured pearl weighing 170 grams was found on the seabed off an island of Myanmar (Burma). It's understood that the fisherman who found the pearl donated it to the then military government, thus avoiding the unpleasantness associated with an involuntary donation.
An offer we can refuse... 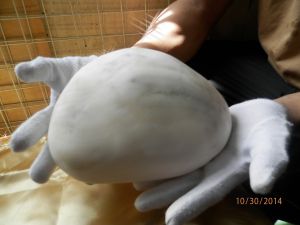 A gentleman from the Phillipines invites The Pearl Market to buy his prized 'pearl' weighing 5.25kg. If anyone's interested, we still have his telephone number. 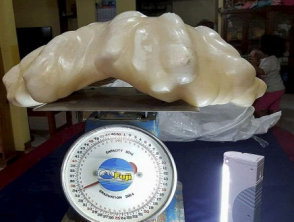 In September 2016 this monster (left) was reported to have been discovered in the Phillipines. Not realising it's value, a fisherman claimed to have been keeping it under his bed as a good luck charm until his shack burned down. Ironic.

Extracted from a giant clam and weighing in at a massive 34kg, its estimated market value was a whopping US$100 million. However, what it looks like is a portion of giant clam shell treated to give it's surface the appearance of pearl. That would be illegal - giant clams are a declining species protected by Cities (Convention for International Trade in Endangered Species).